A brief interlude from the MBS. Skiing in Taos, now in Arizona. Visited Brad's shop yesterday and enjoyed seeing some more dories and learning some new things. Thanks Brad. A few days of dirt biking and bicycling then hope to drop by Andy's shop again on the way home.
Posted by Jon Snider at 7:05 AM No comments:

Another down time. Too tired or getting home too late to do much in the garage before or after work. Post adrenaline rush blahs from last weekend's Super Bowl.  Plus getting everything ready for our trip to Taos, Flagstaff, and Phoenix.  This means somehow packing one truck for skiing, bicycle for Cheryl, and taking my two dirt bikes and gear.  Plus any stuff I may take to give to Andy or Brad.

Doesn't mean I haven't been "working" on the dory.  Doing lots of thinking (see "Contemplation") about how to do the hatch frames and hatch lids and where I want the hinges mounted. Plus I received my order for Minicell foam from Davey at Sweet Composites so I'm working out how I want to laminate and shape it for the boat seat.  Plus how to attach it to the deck. 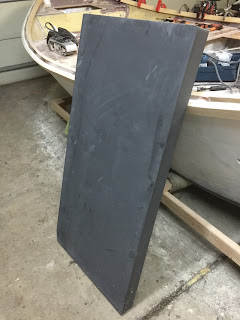 Other items in consideration.  Teak hand rails for the front and rear passengers.  So I don't eject them when we hit a big wave or hole.  Hopefully. 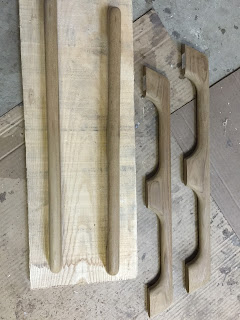 Wood rails which attach next to the seat and help hold it in place.  Footbrace and toe rod - possibly considering an adjustable one.  Hardware mounting for all of the above. Oarlock stands - looking at how to bore, and hide, an extra set of holes so I can move each unit forward or back and make the geometry work for smaller rowers. Antiskid options for the decks.

I've been talking to Jason at Flagstaff River Equip (aka Wet Dreams) about a boat cover and seat cushions for the passenger compartments. 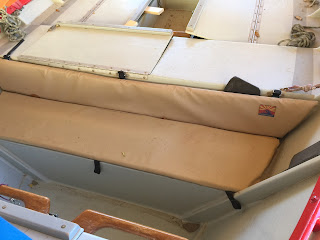 Gonna stop by and visit him on the Arizona trip.

Then there's painting. Turns out I have a family member of a friend who owns a paint shop and empty spray booth.  Hmmm.  He has offered to help me paint the boat, using his spray and safety equipment, if I get the paint.  He'll even help with his wholesale paint discount.  Two part polyurethanes are great for beautiful, hard, durable finishes but are difficult for an amateur and there's also the isocyanates issue to consider.  I stopped using nitrocellulose lacquer finishes in my wood shop for the same reason.  Very tempting.
Posted by Jon Snider at 11:07 PM No comments:

With the invaluable assistance of Kevin the port inner gunwale was fitted, glued and clamped last night. Not without some difficulty. There's a lot more tension on the inner vs the outer rails. Plus this particular piece of ash seemed much tougher and more recalcitrant than the others. Due to its attitude, I had Luigi and Guido clamp it to the sheer for two days for a little softening up, and it finally got the message. 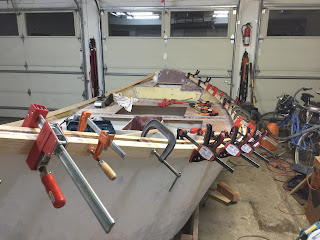 Looking more and more like a real boat every day.

During the inner rail assembly I noticed for the first time that the port outer rail scarf joint was about 12" aft of where it was supposed to be, next to the oarlock spacer to be eventually buried under the oar tower bracket. Not sure how that happened. Just a little bobble. 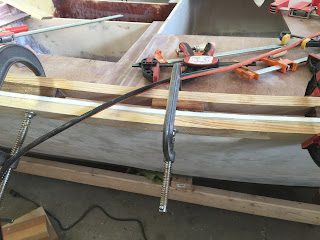 Eased the starboard gunwale edges both inside and out with a 1/8" round over bit. With a little tearout at one point which I was able to partially fix with a little climb cutting. I'm thinking I may need some more softening with a 1/4" shape but I'll prob wait until after my upcoming Arizona trip when I can take a look at some more boats at Andy's and Brad's and steal, er borrow, some more ideas. Since I've seen a total of two dories (Cottonwood & Skagit) live, in person, since my first exposure in 1978, more eyes on experience will be good. 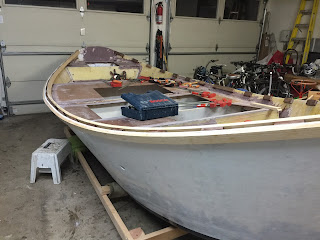 Later, I did a final trim on the inner hatch lid laminations and attached them to the inside of the hatch lids with resin/Cabosil and some brass screws. Notice the return of my high tech clamping system? The lid without the weights is that way b/c I initially put the resin on the wrong side on that hatch lam before realizing it and turning it over. Again, nothing major. From oversight comes opportunity. Let's just call it the first flow coat for that one. We're nothing if not flexible here at the MBS. 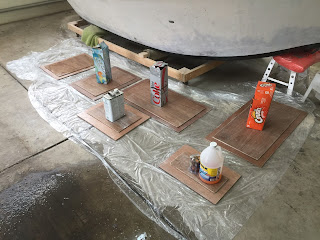 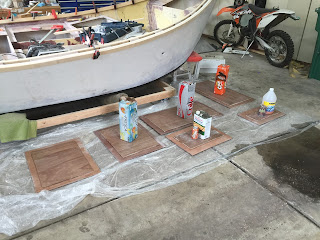 Posted by Jon Snider at 8:11 AM No comments:

Spent part of Saturday and Sunday outside of Buena Vista with good friends. This was a somewhat questionable move as we had a similar get together two years ago when the Seahawks pounded us. Our Super Bowl history is either win (just twice) or get spanked. This SB Sunday started with a nice snowshoe up South Lake Creek with some great views of La Plata Pk., and Mounts Massive and Elbert.   Absolutely stunning. 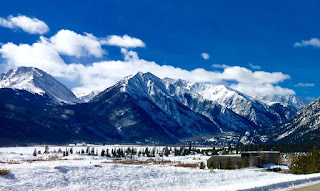 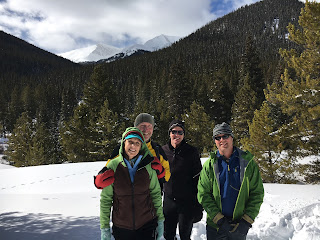 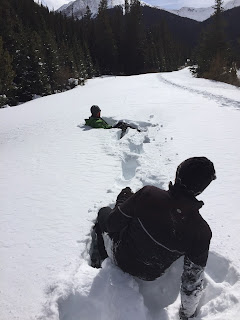 Then back to watch the Broncos pull another one out.  Typical of the entire season, winning ugly, leaning heavily on the defense and special teams. Offense stats worst for any SB victor. But still a win. We'll definitely take it. Didn't even pig out too bad with the great food. Other than the second cookie. Maybe even a net even with the morning exercise.

Then "enjoyed" the drive home last night with 40-50 mph winds and a ground blizzard across South Park.

Just an epic day.
Posted by Jon Snider at 8:07 AM No comments:

Last night after work I installed the inner gunwale on the starboard side. This turned out to be a bit of a struggle as it is difficult to fit an untrimmed 22' board inside a 19' space.

With some help from Kevo, we started at the bow end and cut the rail to fit. Beforehand, I had cut test pieces on gunwale scrap at both the bow and transom and recorded those bevels and angles. 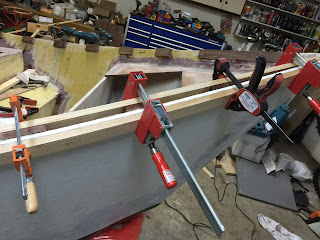 After clamping it to the bow, we somehow wrestled in around to get it close enough to estimate where to cut the transom end. With Mistake #6 expectantly lurking, I left it proud and chased the final measurement down to perfect with several smaller cuts. This of course required replacing the entire rail back on the sheer with multiple clamps each time. Kevin had long since gone to work on a project, so I was going alone. 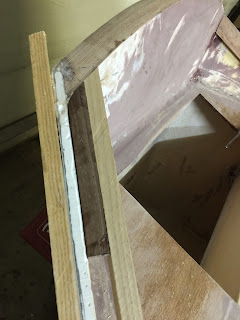 Somewhat scary as it's loaded pretty tight, pretty much like an archery longbow. Something slips and it could be a pretty stout whack to the face. Or worse, the rail could break. 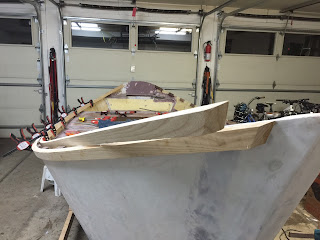 Note that Brad does this a different way, clamping pre-cut templates to each end and then measuring the gap in between. I didn't have enough left over gunwale material to allow the gap to be narrow enough to keep the measurement, which is on a curve, accurate.

Things got better with practice and eventually determined the best method, at least for me, was to mark a line-up spot on the rail and oarlock spacer and start in the middle and work out, adjusting each line a smidge one way or the other to final fit each end. 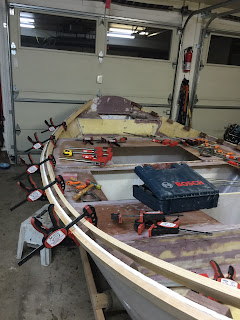 After dry fitting, the rail was epoxied and clamped. 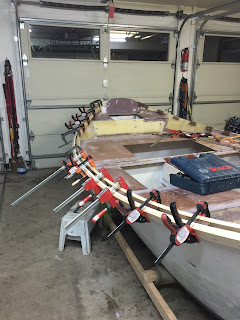 Enough for one night.
Posted by Jon Snider at 12:49 PM No comments:

No, not the ones I utter after slicing a finger on a fiberglass sticky or after mixing too much resin and watching it go off before it's used up...

...which is seriously getting in the way of fun.  And boat progress.  Plus it dumped snow over the weekend into Monday.  Nothing like another round of cold, snowy weather to keep me working in the garage and off my bicycle.  That is, when I'm not shoveling the driveway - four times now, can't keep up. Or Working (the other kind)... 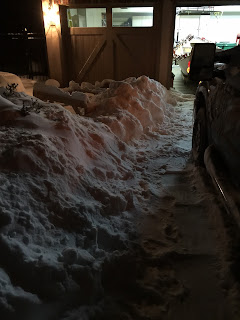 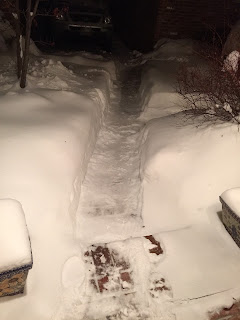 After the weekend shifts I was able to get in a little production each day. The port outer gunwale went on. 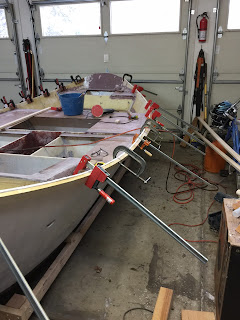 Then I trimmed both sheer edges with a pattern bit and router.  Made a hell of a mess. Cabosil shavings with lots of static, stuck to everything and now tracked inside of house.  Not good. 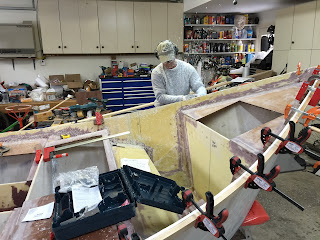 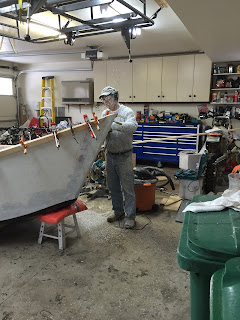 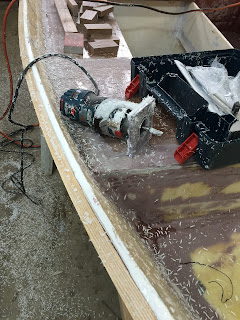 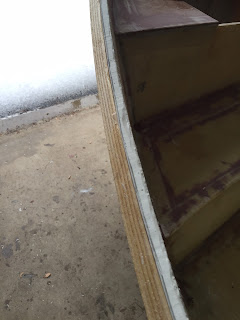 Followed by both the starboard, and later the port, spacer blocks. 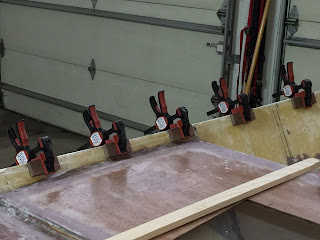 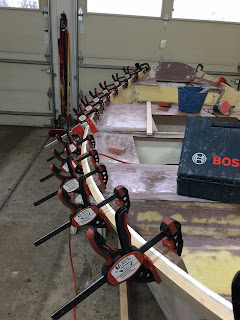 Highland clamps - "How did that interloper Bessey slip in among us?" 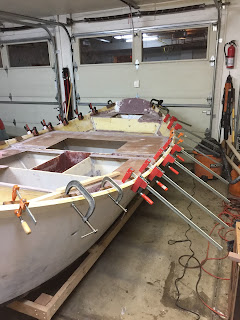 I'm starting test cuts to determine the miter angles for the inner rails. Was going to go ahead with the final cuts, but the untrimmed inner gunwales are too long to fit inside garage, and every time I opened the garage door half of the snow on the Front Range tried to come in. 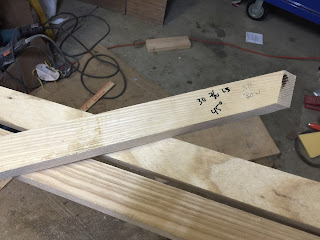 And I started some of the milling and ripping of the Port Orford cedar for the hatch frames. Smells nice. 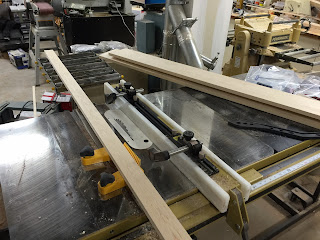 Posted by Jon Snider at 8:15 AM No comments:

Horse to the Barn

It's about time to review my notes, look over my email advice from others, and maybe reread some of Brad's and Kelly's blogs.  I'm getting closer to the end.  The horse is picking up speed, knowing the barn is just around the corner, and there's a chance I might just blow by something important.

Mistake #6 could be pending.  There have been a lot of days now I've managed to avoid that one. Granted, there have been almost daily mistakes, screw ups, miscalculations, material wastage, unnecessary purchases, time delays, and compromises.  All normal and expected in the process of constructing a boat.  Especially with me building it.

But the big one has managed to stay away for some time.  Or maybe I've redefined "big"?

Anyway, there's a lot of good info on those blogs, and I'm thankful for any and all good ideas and advice.