First "we" installed the rear handrail.  Previously the teak was shaped and finished with LTV. 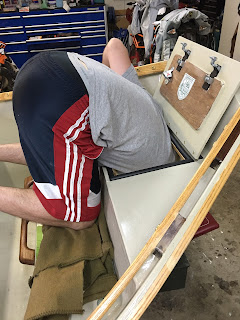 The rear rail was placed in front of the rear seat.  Both because it looks good there but also since the rear compartment is pretty tight and there's no room for knees if the rail is installed along the aft wall of the rear cross hatch. 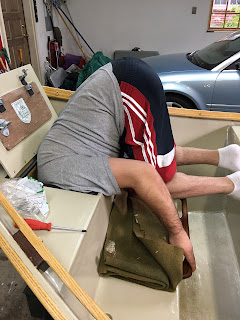 It was somewhere around here where we decided that one rail would be plenty.

This installation was tough.  Fortunately I had a much more flexible assistant.  Kevo to the rescue!
Gonna have to give him some time on the oars.  Or maybe naming rights to the next dory?

On second thought, as he was the originator of the Proud Mary (and subsequent bastardizations) name,  no. 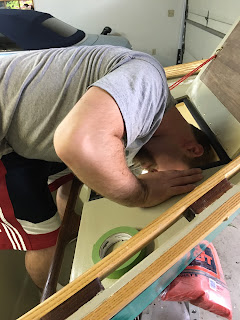 I was getting sympathetic low back pain just watching and filming this! 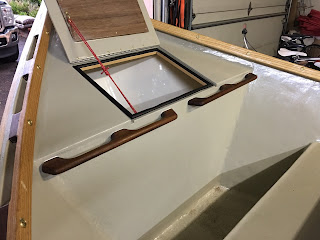 The front handrails went on a little easier (more room in the hatch), but the angled screws going into each end piece took a little effort.  I even spelled Kev here to take a few turns on the screwdriver. A couple more looks at the rails.  Looking good. 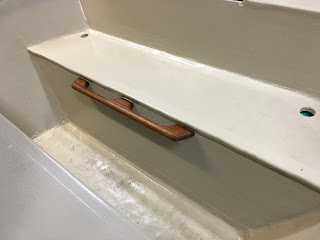 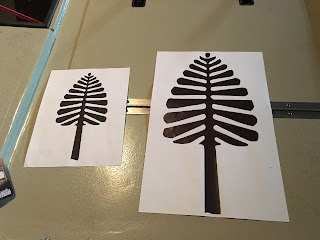 Then it was time to start working on the Lone Pine logo for the transom. 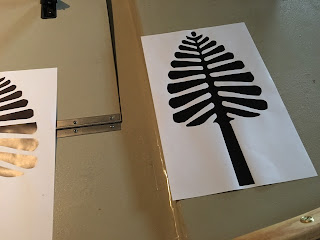 It was here I learned, after Google and Maps searches, that Kinko's is no more. Maybe this is old news to others here?  (This is, of course, assuming there actually are others here).

So it was off to FedEx where we enlarged the .pnp file and tested it out for size and position below.  Thinking maybe a little higher? 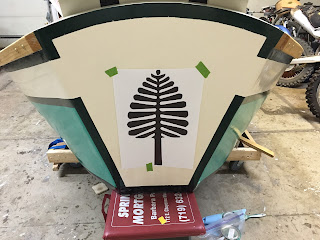 Next plan is to use some type of adhesive vinyl or large masking tape to cut out a stencil which I can use to paint the logo on the boat.