Well, the first attempt at making a stencil for the Lone Pine logo didn't go so well 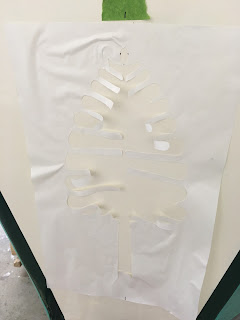 It turned out the laser stencil paper had an unknown 3rd sticky layer on the inside which came apart when I tried to apply it to the boat.


So, off to Hobby Lobby where I learned all about Cricut, apparently a huge crafts industry which everyone in the store except me (all women) knew everything about.  And were very nice in giving me some good advice and tips. At one point we had three folks arguing different technique options. 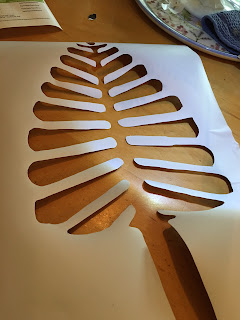 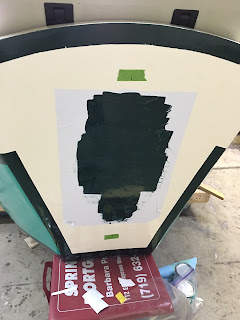 The new stencil was applied to the transom, using the Cricut overlay paper, and several coats of Jade Green paint were rolled on. This happened over two days as there were multiple work interruptions (foreshadowing alert). 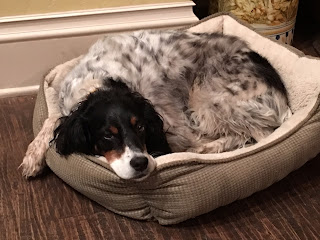 Ruby almost got out of her bed she was so excited. 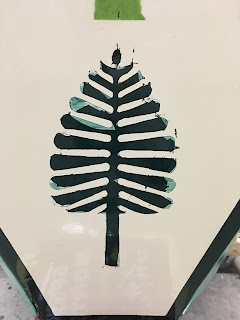 The stencil was carefully removed, with great anticipation this AM and this is what appeared.

Yuk.  It looks like there was some paint bleed under the stencil even though I pressed the edges down with a squeegee edge.  And worse, in several of the limbs the paint partially peeled off with the sticky stencil. I'm guessing I allowed the paint to dry too much before I pulled it off.

Major bummer.   But nothing new for this boat.  Par for the course.

Better yet, I have a leftover lifetime supply of Cricut paper to play with!

Since my wife is becoming a very accomplished water colorist, I'm sure these very minor touch ups will be no challenge for her.   Cheryl???