Friday night I filleted all of the pipes and undersides of the seats, and did some seam taping where I could get to it.

This started out on a real poor note. Despite adding more and more Cabosil and fillet blend, until the stuff was way beyond "crunchy peanut butter", maybe more like 3 day old bread dough, I couldn't get the fillet mixture up into the corners, around the pipe cuts, and along the bottom edges of the seats w/o dropping about half of it. Onto the boat, and on me. It was especially fun when I had to crawl into the front cross hatch. 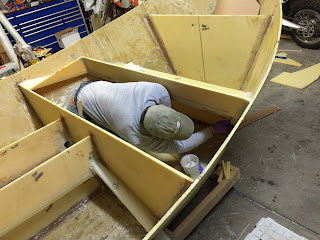 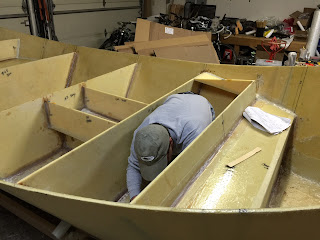 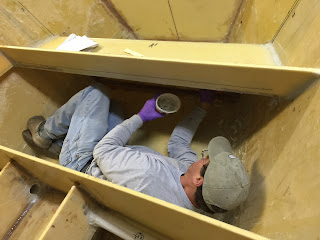 Thinking about advertising for a very small person to do the rest of the filleting under the decks and hatches when that comes up....

But a couple of days ago, while I was caulking the shower it came to me that a caulk gun and tube would sure be a nice way to get to the tough fillet spots. I'd tried the Ziplock bag trick with so-so success but it wasn't going to get the job done upside down deep under a seat.

So I'd gotten some empty caulk tubes at a local paint store after work the next day, and, after my experience with the front cross hatch, decided to give one a try. Bingo! It was a bit of a pain to fill up, but it worked like a charm on the stern hatch!  Things are looking up. 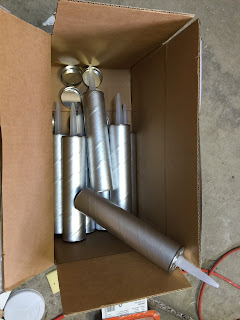 Thinking, hmm so far I've made some big moves the past few days and have managed to avoid Mistake #5, I decided to do the spare oar pocket next, since I needed it done before I could go on to the decking. And then remembered that I'd already filleted the seat back I would need to cut out. So out come the recip and jig saws.  Just a little noise and mess and scraping off of a perfectly good fillet and seam tape. No biggie. We'll call #5 just a minor boo boo (well below 4.5 on the dory build Richter scale), just a little set back and some fillet practice.

I seem to recall something like this happened during Kelly N's build (link on right).

Oar pocket goes on the port side. Always. Starboard side is bad juju. Put your spare oars over there and you'll be using them all the time. 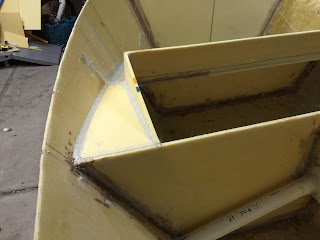 Anyway, oar pocket gets cut out with Core Cell and filleted and seam taped. That's probably the last of the Core Cell for this boat. Will be moving on to Meranti decks, Port Orford Cedar hatch frames, and ash gunwales soon. 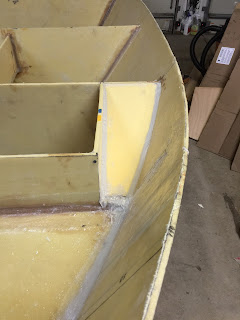 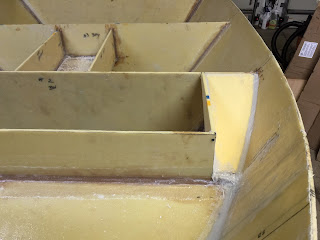