Tools of the Trade

So what's been accomplished since the last post?  Let's see...  Not much. 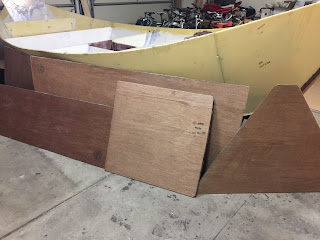 Decking was installed with a dry fit, all edges trimmed with hand planes and Surfoam, and reinstalled with silicon bronze screws - waiting for filleting and seam taping. 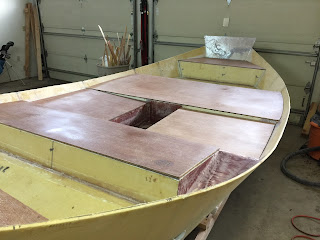 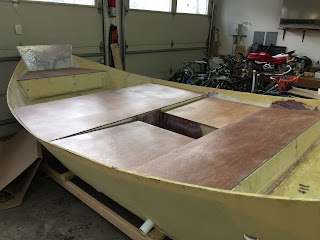 I reinforced the underside of the large rear cross hatch deck with some strips of 3/8" Hydrotek, then glued them in with some epoxy and coated the wood with epoxy. 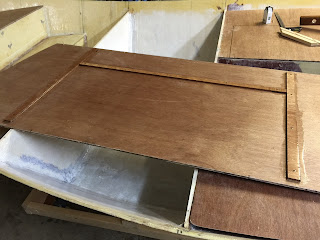 All of the hatch lid outlines were traced onto each deck.  This required some head scratching (see "Contemplation" post) trying to figure out what would go in each hatch. Since in the end I didn't really know, after all my last trip in a dory was 1978, I just winged it. I did offset the seat for the front cross hatch to the left.  This will allow getting some longer stuff such as my guitar in there. I also thought about making the bow hatch bigger, to give a bigger opening for maybe some lighter, but bulky stuff such as dry bags. Eventually I chose to go with the standard size when I discovered that if I made the opening much bigger I wouldn't have room for the frames around the hatch lid openings. 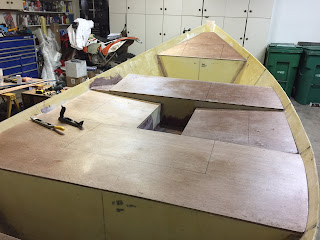 Installed deck edges were trimmed with either a flush trim router bit or with hand planes and Surfoam, depending on the angle of the deck.  The trim router bit, at least the long ones I own, were pretty much useless on the more steeply sloped decks. All edges were eased with a 1/16" roundover or with my Radi Plane chamfer unit. 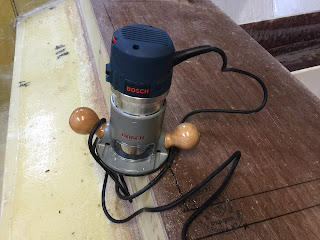 Hmm, that actually doesn't sound too shabby for a working slug.

Seems like a good time to bring up some of the things I've used to build this boat.

Top billing goes, of course, to my Surfoam collection.  It's hard to believe I've had one of these for over 20 years and never really used it much in the wood shop.  Just a great tool for fiberglass edge trimming, knocking down dried sharpies, Core Cell and fillet shaping, etc.  I now have a smaller hand unit plus a backup full size one (don't like the shape of the new handles) which I scored in the dollar bargain bin at a Denver Lowes.  Woo hoo! 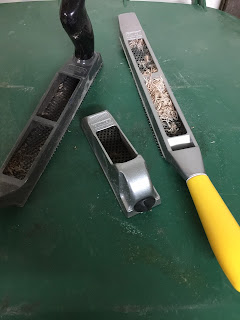 Dewalt laminate trimmer and Bosch small plunge router.  Just your standard units.  Every shop has one.  But I'm betting every shop doesn't have 5 which is what I just counted the other day - when you also consider my Porter Cable big router under the router table, a large Makita plunge router that I have no idea how or where I acquired and have never used, and my old 690 PC router which was under my first router table, where it lead a hard life and is now gracefully retired to a drawer. 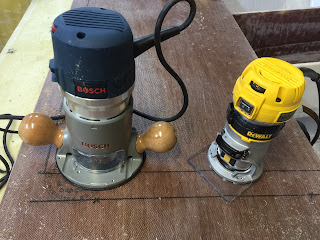 Makita reciprocating saw. Pretty standard unit as well.  Not much you can't cut with this, including a mangled trampoline and aluminum frame which landed on top of our basketball goal after a big wind storm. No way to save that one.  Kids were very sad, but future hospital bills got smaller. 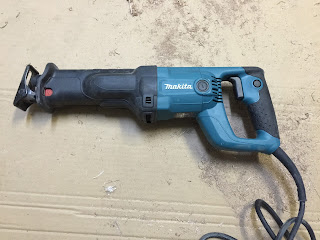 PC jig saw. I've had this as long at the router and it has served me well. Lots of use for this with mainly panel cuts, and seat and latch cut-outs. 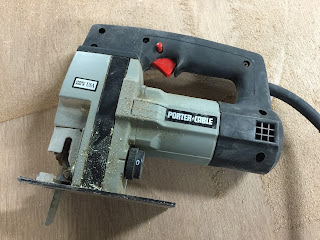 Skilsaw circular saw - used to cut the bow post and transom angles, plus all of the bevelled cuts on the decks. Am anticipating, with some trepidation, that it will be the tool of choice for the transom arch and motor mount cuts. Thankfully well down the line. 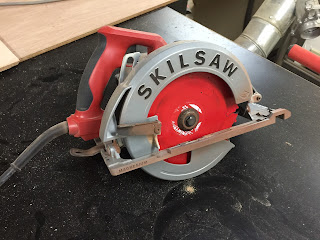 Makita 9227 polisher.  This is the standard unit in nearly every auto body shop.  Works great as a polisher, but even better as a sander with a soft pad. No dust collection, but just move the boat outside and go for it.  Hope for a good wind. 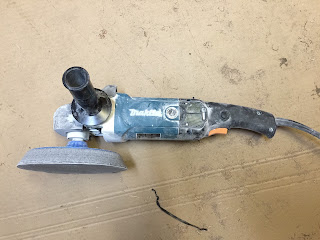 Makita chop saw - as I've mentioned earlier in this blog, my favorite power tool in my woodshop. 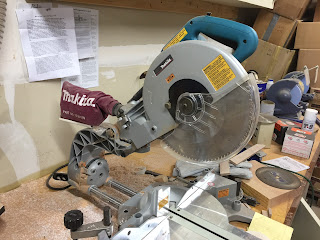 Makita drills/screwdrivers.  I'm sensing a Makita theme here. Mostly I like their stuff. Standard lithium battery units which get almost as much work in my shop as the Surfoams. I liked the older, non-lithium battery ones better but the two older Makita and Dewalt ones I had died early in the project.  It probably didn't help much when I spilled some resin in the Dewalt motor and left the Makita outside in a rain storm during vegetable garden raised bed construction. Every day is a learning opportunity. 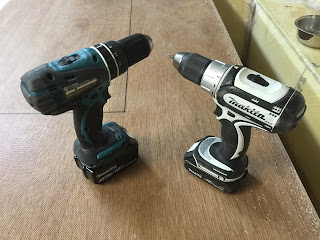 PC random orbital sander.  Part of the ancient PC trio, I've also had this forever and keep thinking it will die one day with all of the wood, and now fiberglass, dust it has inhaled.  The new pads don't seem to stick very well with the PSA sanding disks, but nothing a little spray contact cement can't fix. Also requires a good steady cross-wind for "dust collection". 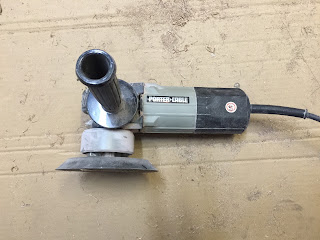 Lest you think I'm simply a power tool Philistine, below are some of my favorite hand planes, from a large collection which have reproduced and thrived in my special plane drawer in my basement shop.  A Lie-Nielsen low angle block plane on the left and a Veritas std angle block plane in the middle. These are great for trimming up the deck and frame edges.

Surfoam is photobombing the pic: 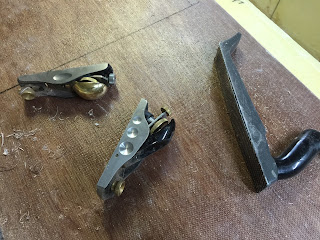 Every time we drive up the Maine coast highway 1, passing through Waldoboro (where we've never found Waldo) we always stop at Tom Lie-Nielsen's shop in Warren.  It's always good for a couple hours of poking around and I defy any woodworker to leave there w/o a new tool or two. 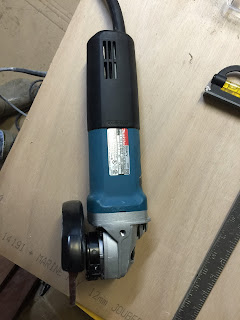 Another place worth your tool time is Liberty Tools.  There's a shop on the coast road in Searsport but it seems to be open only b/w 1-2PM on leap year Wednesdays.  The main shop is in Liberty and the two floors must contain 1000's of versions of every antique tool ever made.

Here's my Makita angle grinder.  So far not much dory building use but anticipate firing it up for some of the hardware work. And maybe easing some of the seam tape selvage edges.

Digital scale.  I've been measuring by weight rather than volume.  Along with my resin:hardener spread sheet this has been great to use.  Just a piece of wax paper or saran wrap on top. And then back quietly into the kitchen, good as new. 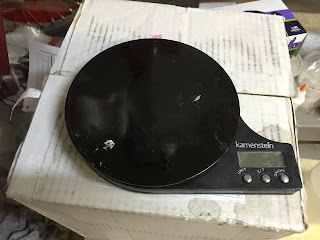 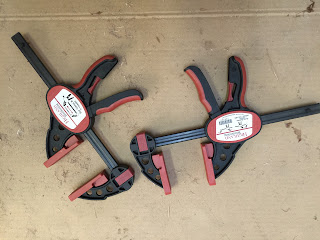 Finally, here's my tick stick.  Perhaps the best tool of the whole sorry lot as it was cheap (free), made by me, and it worked great. Sort of a nice coda to the tool excess above. 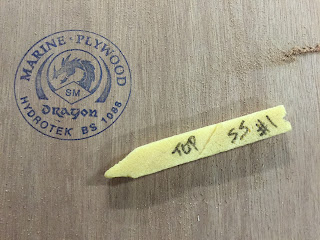 Here's one tool I'm hoping I won't have a use for. 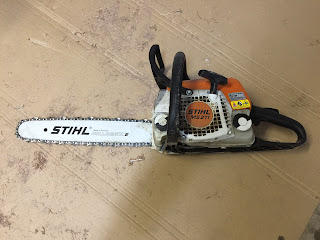 Then there's Roger Fletcher, who, in his book "Drift Boats and River Dories", seems to indicate you can build these entire boats with just a hand saw, Yankee screwdriver, Stanley brace drill, and jack plane.

Knock yourself out Roger.  Not giving up my power tools.