Unfortunately literally. Back to my vocation, versus my boat building avocation. After having the last week off with lots of dory production (at least relatively for me) it looks like not too much will be getting done with my routine 60+ hour work weeks. We'll see how much energy I have after work, or maybe with some 5AM sessions before heading out.

So far, I've been able to refit the seats and backs after glassing. I added an extra strip of Core Cell across the bottom of each seat for additional support. 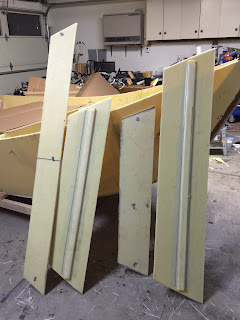 Now I'm trying to figure out how to cut a 2" piece of PVC sch 40 pipe lengthwise to use each half as part of the drains under the seats. The first attempt with my band saw was a dismal failure. I've needed a new resaw blade for a while and this just confirms it. 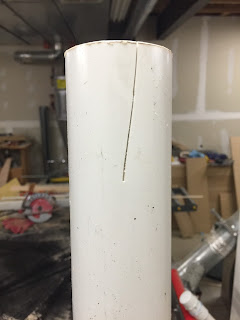 Thinking about attaching the PVC to a piece of wood, with some screws at each end so the pipe doesn't roll, and trying the cut on my table saw.

Once cut,  it looks like I have two options for installing the pipe half. One is to put it in place through the two holes in the hull and then set the seat on top. I'm not too excited about this option since it means I have to somehow crawl underneath and fillet the back side edge. (Unless I want a lot of water draining into my cross hatches.). The other is to attach the pipe to the seat bottom in advance and then somehow wiggle it into place. This will require the pipe length to be just right.  Too long and I'll never get it in. Too short and the pipe ends drain inside the boat. Sort of a Goldilocks PVC pipe.
Posted by Jon Snider at 8:15 AM