I managed to get a little done this week with some late night sessions after work plus some dabbling at 5AM for an hour before going into work.

First, I changed the blade on my band saw and spent a half an hour setting up the side blocks, thrust bearings, table allignment, and blade tension. Much better. The second try at a straight split down the middle of the PVC pipe went swimmingly.

I abandoned the table saw idea after stumbling across a You Tube video of a guy ripping a freehand cut and the pipe exploding into a hundred pieces. Not a good vision to have when you're pushing the table saw start button. Spoiler alert here.

The split 2" pipe goes under the seat, with holes drilled into the seat which will drain into the pipe and then out the sides. At least that's the way it's supposed to go. The pipe cuts where each end penetrates through the side panels are compound miter cuts. To account for both the outward flare and the sheer angle of the panels. No big deal, right?  I have my favorite shop tool just for the job - my beloved Makita sliding compound miter chop saw. 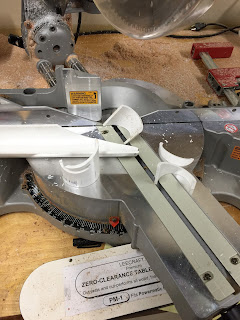 Hmm. Good thing I was wearing eye protection. After this I also put on my full-face lathe shield for the rest of the cuts. It was no problem making one angled cut, but each time I tried to add a second angle, bam!  The Makita and I compromised and went with just one angle. 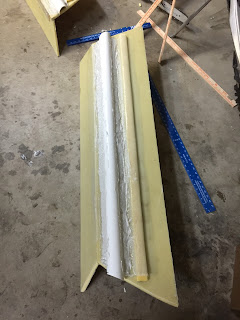 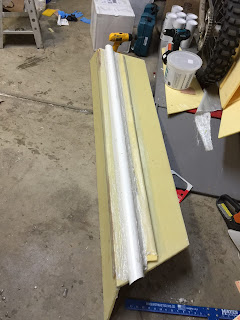 The split pipes were filleted onto the underside of each seat, then I spent about an hour trying to figure out how to accurately measure where to do my hull cuts. Not an easy thing since the pipe halves stuck out just enough to make it impossible to fit the seat in the correct spot, until the holes are cut making room for the pipe ends. Kind of a Catch 22.

As mentioned earlier, this was one of two options, and I chose it since it seemed to me getting a watertight fillet across each long edge of the pipe-seat bottom joint was the most important.  Turns out this was a really good decision. 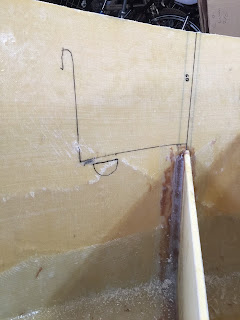 It's no small thing to take a hole saw and cut a half circle in a hull you've spent 100's of hours working on. But it gets done.

Seats are in and fit well - after a little adjusting and of course some Surfoaming. 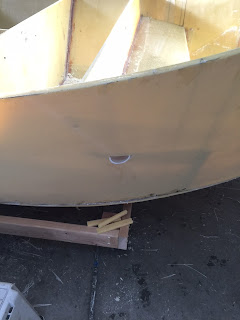 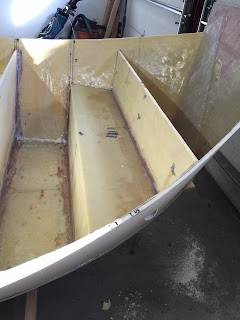 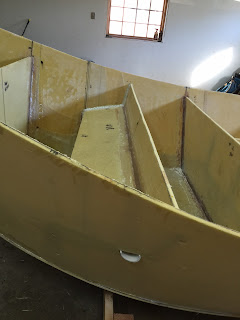 What would I do differently next time (assuming there is in fact a next time, there's a good laugh)?  I dry fit the seats and seat backs in advance and filleted and seam taped them, b/c I wanted to see the fit and get a better feeling about the PVC pipe drain locations.  This made getting the assembled unit back into the boat a little tougher and if I were ever to do this again, I might just install the seat backs later and deal with doing the upside down seam tape edge after installation.

I'm writing this just to let other folks know their options......  There's another good chuckle.  So far I have no followers and 4 comments (thanks family!).  And most of my page views seem to be coming from China and Kazakhstan.  Didn't know there were active dory boating communities there.

On to the footwell drains. These were not nearly as hard since there was no seat attached. Just drilled some holes with a 2 3/8" hole saw and then threaded the PVC through. I did miter the angle inside the foot box to fit. 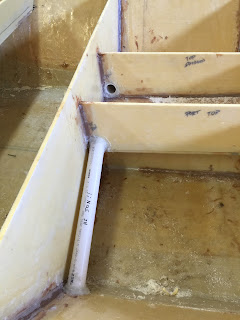 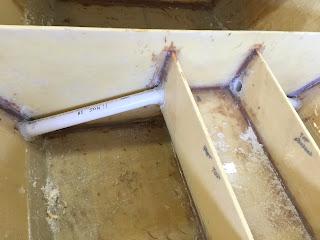 Still not sure what I'm going to do about the pieces of pipe sticking outside. Not enough room for a circular or jig saw. No chance with a recip. I'm thinking maybe a flush cut with a Multitool blade, but still thinking a little about the exploding pipe. The consequences will be a whole lot higher if the pipe fractures inside the hull, since everything is glued in now. Not going to do the seats and pipe again! 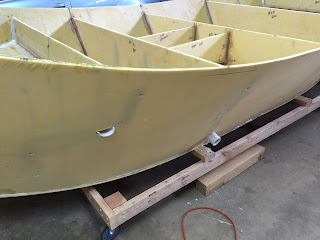 Edit:  A couple of months after getting through these steps I saw a new and better way to drain the passenger compartments at Brad's shop.  Just a through-bore at an angle through the seat corner and out through the side panel.  I think some type of pipe was installed into the bore hole but not sure.  MUCH easier than a half-pipe under the seat.  Oh, well.  Next time......