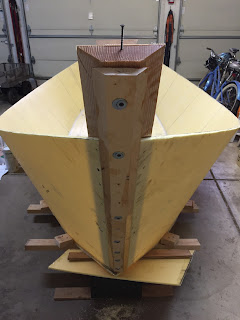 Port Orford Bow Cap added after fairing the front edges of the side panels with my trusty Surfoam file.  I attached it with several drywall screws, plus one larger carriage bolt (now removed from the center hole) since the screws weren't pulling it together tight enough. 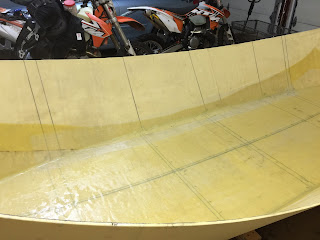 Bottom glassing was a chore as expected.  It's a long reach to the middle on this 54" wide hull.  More than once I overreached, or slipped, and had recurring thoughts of breaking a side panel.  Or taking a face plant in the wet epoxy.  Fortunately, the Mistake was avoided.  This time. 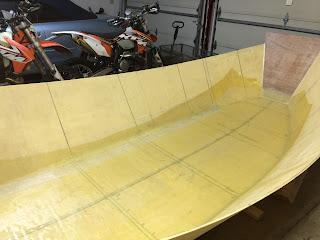 I used a layer of 5 oz. Kevlar on top of the pre-existing 10 oz. E Glass layer, then added another E Glass layer. 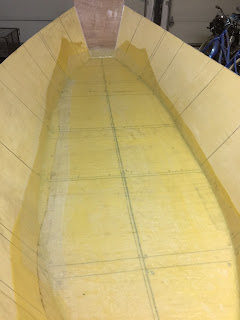 You can see where, after multiple attempts to cut the Kevlar, with several different scissors including a "Kevlar" set, I finally said screw it and bagged trying to cut off the corners.  More strength.  I'm starting to reconsider using the rest of the Kevlar for the side panels or maybe wishing I'd wasted more of it on the first transom piece.
Posted by Jon Snider at 7:51 AM