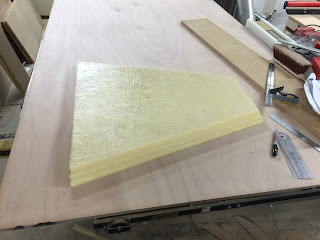 The banished Core Cell & Kevlar transom slinks back in for its curtain call.  I use it as a template for estimation of the side angles and a reminder to measure twice and cut once. 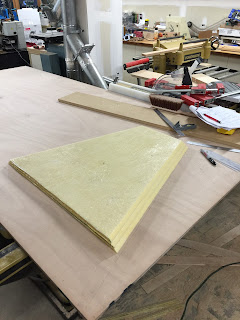 Three layers of 1/2" marine ply are marked (thrice) and cut, and then laminated together with epoxy and 404 filler. Later, after drying,  I again used my circular saw and edge guide for the initial straight cuts, and the 45 degree side and 32 degree bottom bevels, since for the life of me I couldn't figure out how to use my table saw and fence (with no parallel edge, at least on the two angled sides) unless I built a jig with a crosscut sled and some hold-down clamps.  By now I was pissed enough at the whole transom deal to just want to move on.  This attitude, choosing the expedient rather than the likely best method, has backfired on me in the past, but this time things went well.

I did sneak up on the side bevel cuts, with several trips up and down the stairs from the garage to the basement shop to ensure getting it just right.  Next boat I need to either build downstairs (and then cut a hole in the house to get it out) or move my wood shop upstairs.  Honey, about that corner of the southwest part of our yard??? 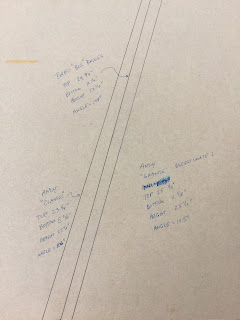 Since I couldn't know the exact height of my transom (although I could get a rough measurement from the boat with the stern stem still attached), I needed to determine the angle of the side cuts, drawn off the centerline perpendicular, leaving extra room at the top for the sexy arched top.  I worked from a known bottom width, with the intention of narrowing the transom, but maintaining the side angles, until it looked like it fit.  Andy had transom sizes for both his standard Briggs dory and an estimate for the Grande one, plus Brad generously sent me the dimensions on the bigger Briggs he is starting to build.  I used these to draw the side angles b/w the top and bottom and learned that all angles were in the same ballpark. 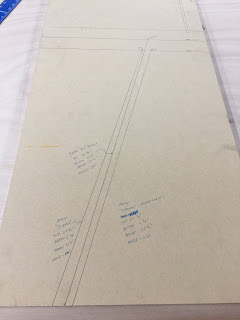