No pics of these in progress.  Mainly b/c things didn't go quite as planned.

I made the bow stem out of a nice piece of CVG Douglas Fir, cutting the side bevels at 45 degrees and the bottom one at 42 degrees.

There, that sounds pretty simple.  But not really.  First, my table saw bogged down in the middle of the first 45 bevel, pretty much chewing up the cut and burning the wood.  Turns out my Forrest WW blade, which had been used on multiple cabinet and armoire projects was extremely dull.  This lead to a trip down to Tony's Saw Shop where my blade would be sharpened and ready in about 4 or 5 business days (plus Veterans Day).

Plan B - I re-cut the bevel with a circular saw using the factory edge of a left-over piece of MDF as an edge guide.  Actually, I did a test cut first with another scrap piece of 8/4 hard maple.  I figured if this would work, the fir should be no problem.  Plus it was the only 8/4 handy and I wasn't in the mood to wait for a glued lamination of 4/4 to dry.  My circular saw had a new rip blade in it and it worked fine.  For practice I finished the other bevels on the maple and will use it as a temporary stern stem post.

On to the Doug Fir stem - the side and bottom bevel cuts went fine, but having mucked up the first cut, and or-so-cleverly buying just the perfect size at CO Lumber to cut costs (CVG Fir is not cheap) I was left with a bow stem which was about 1/2" narrower than spec.

I'll just cut my bow cap a little smaller, which will save some Port Orford Cedar.

Next up - the transom. This was always an estimation (Andy's plans - "guesstimate") of the actual size since we were working off of his double ender Grande boat and adding a transom for the first time. Seemed like a good idea to me at the time.  Something fun.  Different.... 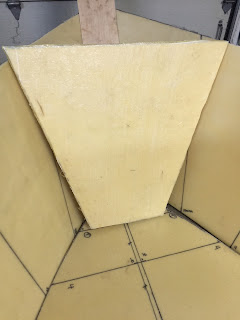 Here's a picture of it down the build line a little, masquerading as a final unit but failing.

I laminated 3 pieces of 1/2" Core Cell together, with layers of 5 oz. Kevlar b/w the foam for extra strength and stiffness (remember motor). Plus 10 oz. E Glass on the inside face. Things went swimmingly. I built the piece plenty big enough, or at least I thought.  Turns out the plan measurements are from the inside bevel on the sides and bottom, requiring a much taller and wider piece than I planned after accounting for the 45 and 32 bevels.  I'll learn this a few days later after piecing the sides and bow / stern stems on, but will call it Mistake #4 now.  Seems likes these are adding up. Adios to a nice panel of 1/2" Core Cell and some not cheap Kevlar.